The CRA will be hosting a ribbon-cutting for the renovated Bo Diddley Plaza on Thursday March 10th! Come share the moment, grab some coffee and we’ll meet you in front of the water wall! 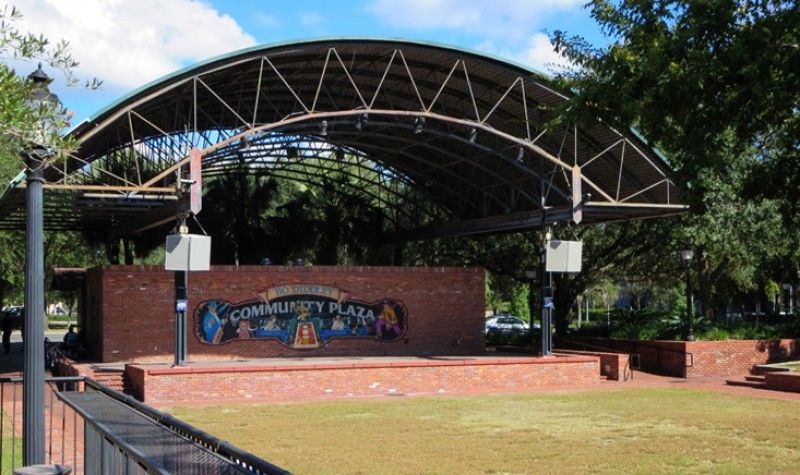 The CRA will be hosting a ribbon-cutting for the renovated Bo Diddley Plaza on Thursday March 10th! Come share the moment, grab some coffee and we’ll meet you in front of the water wall! Learn more about the renovations here. ‪#‎heartGNV‬

GAINESVILLE, Fla. – After one year of construction, the newly-renovated Bo Diddley Plaza will open to the public on Tuesday, March 1, 2016. The Gainesville Community Redevelopment Agency (CRA) will host a ribbon-cutting ceremony on Thursday, March 10 at 9 a.m. at the plaza located on 111 East University Avenue.

A pre-opening concert headlined by nationally-acclaimed R&B singer Charles Bradley will take place on Thursday, February 25 from 6 p.m. to 10 p.m. The Gainesville-native has sung at Bonnaroo, South by Southwest and Coachella; this concert will be his first performance in his hometown. Organized by the annual public interest communicators conference frank 2016, the celebration will feature live art by 352Creates, performances by local bands and a variety of food trucks and micro-brew vendors. The $1.8 million Downtown Plaza north side improvements include a new café space, gently-trickling water wall with 250 programmable lights, informational kiosk and a green room for enhanced performances. Led by the CRA, the plaza revitalization will draw more events like yoga, concerts and festivals Downtown… creating a fun, active space for all to enjoy. “This has been a true community endeavor and an opportunity for many City departments to collaborate on infusing more life and activity into the heart of our Downtown,” said Interim CRA Director Sarah Vidal-Finn. “We’re excited for the public to experience the new space and enhanced offerings at the Bo Diddley Plaza.” The City of Gainesville’s Parks, Recreation and Cultural Affairs (PRCA) department led additional improvements to the south side of the plaza while the CRA had it closed for construction, which include acoustical improvements to the stage, brick repairs, enhanced turf, better lighting and a stage mural re-touch by the original artist. In addition to the physical improvements, citizens will find that it’s easier than ever to use the plaza for events. In line with the Blue Ribbon Advisory Committee on Economic Competiveness’s recommendations for making the City of Gainesville more user-friendly, the CRA has worked closely with other departments to streamline the plaza rental/operations process. Contact CRA Project Manager Malcolm Kiner at 352-393-8204 for more information about the Bo Diddley Plaza re-opening. Interested in using the plaza for an event this year? Contact Nigel Hamm at 352-393-8202 or visit the plaza’s new mobile-optimized webpage at www.bodiddleyplaza.comv